A Water Tank Guy Walks Into A Wastewater Plant... 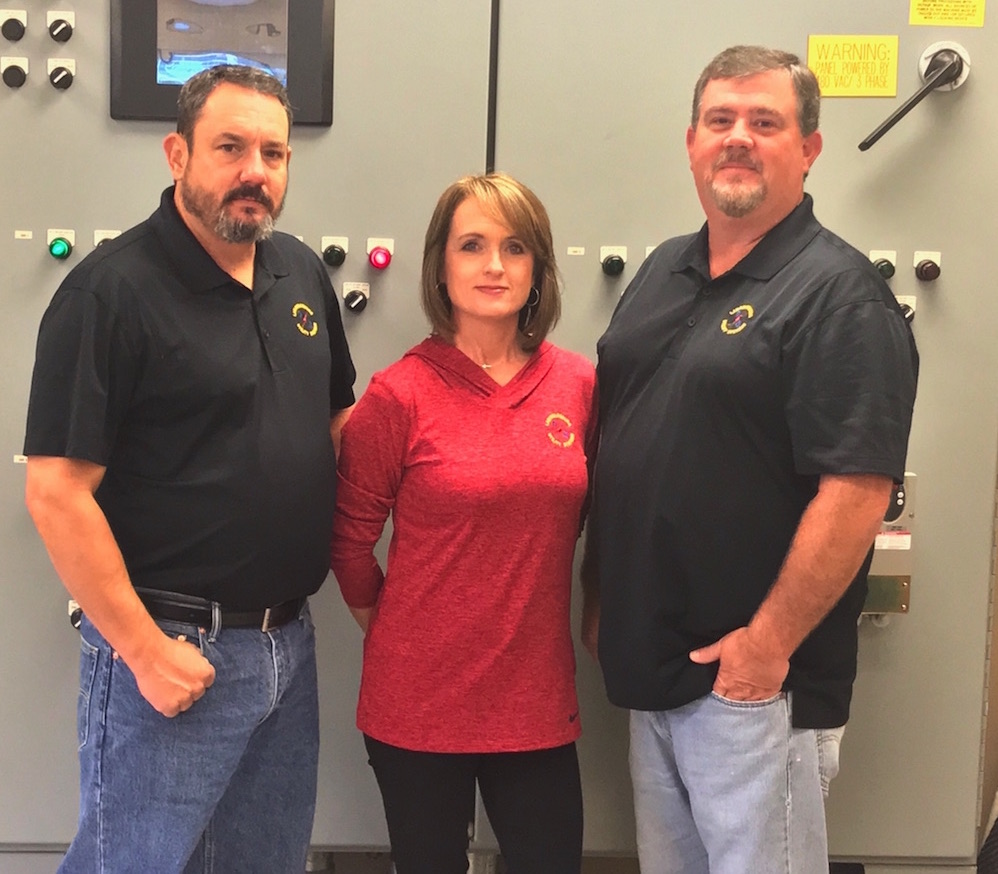 After reading the title of this piece you may be thinking this is going to be a funny anecdote about wastewater—quite the contrary. This is a recent success story that involves a low-risk, very-high-reward decision and some clever problem- solving. It’s a tale about a water tank guy, a group of wastewater operators, and five minutes at a region meeting.

How a “Crazy” Idea Was Born

Several months ago I was at a Region 7 meeting, giving my standard presentation about water quality management. Towards the end, I briefly mentioned that Southeastern Tank also offers Medora GridBee AP air-powered lift station mixers that diffuse air, keeping the station clear and reducing odor.

The meeting ended and life went back to normal, but a few days later, my phone rang. On the other end of the line was Keith McCafferty of the Lawrenceburg Wastewater Treatment Plant. Keith had attended my presentation and he wanted to talk about those lift station mixers.

Steve and his team were having a bit of a problem. Their plant’s wet well grinder was under repair and a thick crust of debris had formed across the top of the well, impeding production. Since the grinder repair was taking some time, Keith had an unprecedented idea. What if, he thought, we tried one of the lift station mixers in the wet well? 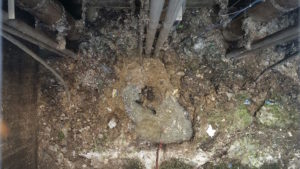 Pictured: Debris crust that had formed at the top of the wet well.

At first, I didn’t think it would work since the wet well is 20’ x 25’ and an AP500 is designed for 6’ diameter lift stations. We had never tried one in a wet well of that size. Could the mixer really make an impact? And the size Keith wanted to use – the single horsepower AP500 – just wasn’t designed for a cubic volume so large.

Keith’s logic was that for less $3,000, it was worth a try. The air compressor is self-contained, it runs on 120-volt power and there are no electrical components in the wastewater. Fortunately for us, his boss, Lisa Porter, is also an outside-the-box thinker as well. The test would begin. A hole was punched in the debris and an AP500 was installed in the tank. 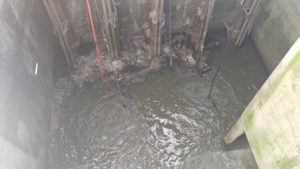 Pictured: One month after installing the lift station mixer, the majority of the debris crust had broken up.

One week went by, and it seemed that the hole in the crust had gotten a bit bigger and more liquid was visible. Another week went by and the hole had grown even more. After three weeks, there was significant breakup of the crust in the wet well.

At the end of one month, there were still some deposits of debris around the edges, but the vast majority of the solid material had been broken up. The plant was running more efficiently, and the grinder had just been fixed. It was decided that we needed to use two AP500s to accomplish the task but the results were undeniable and it’s doubtful that a crust like that would be seen again. 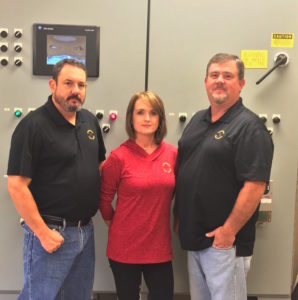 
One Good Idea Breeds Another

After seeing how well the AP500 performed in the wet well, Steve Summers, had a problem that bred another good idea. One of the blowers in a chlorine contact basin was broken. Replacing the blower would cost $4,000 and the blowers run on four phase power. Not only is an AP500 less expensive but it will cost less to operate. Steve approached Lisa about the idea and then called me. They wanted to try in the basin. Pictured: SET installed a mixer in one of Lawrenceburg’s chlorine contact basins. In order to control the amount of air, we installed a ball valve on the unit to allow Steve to control the air flow in the chamber. Keith ran 120 power to the area and another test began.

After two days, Steve saw something he had never seen before. The chlorine contact basin was so clear that he could see the bottom of the chamber. The induction of diffused air that is provided by an AP500 had clarified the entire basin. Not only did the AP500 work and chlorine residuals maintain, but during regular operations, the hope is that even less chlorine will be needed due the reduction of algae in the basin. All this using less power.

After this experience, Keith and Steve started telling the Lawrenceburg collections department about their success. Shortly thereafter, we installed an AP500 in the Sundance lift station. Located next to Wal-Mart and several restaurants, the station is notorious for grease capping after only a few days after cleaning. This obviously leads to odor issues and loss of control when grease affects the float switches. After two weeks of operation, the lift station remained completely clear without any evidence of grease.

Lawrenceburg is currently in the process of evaluating larger units, AP8000s, for use in their aeration basins. These units will be suspended in the basins, above the silt layer which allows air flow to be maintained unlike traditional diffuser grids that can short circuit only after a year or two of operation due to sludge build up. Also by using 120 volt, 20 amp power, the AP8000s could significantly reduce the power usage as Keith estimates that the current blower system consumes almost 50% of plant’s kilowatt usage per month.

Given the success that Lawrenceburg has seen, we think they are similar solutions for other facilities using this simple, scalable air diffuser. GridBee AP diffusers range in size from a 12-inch chimney with a single-horsepower compressor all the way up to a six-foot chimney and whatever diffuser array is needed. Whatever the challenge, there is a properly sized diffusor to address the issue.

This isn’t just a story about how a piece of equipment helped Lawrenceburg Wastewater Treatment Plant. It’s about how its team of operators captured on an idea they picked up at a region meeting and put it to use. I’m pretty good at running my mouth and have all the AP500s you could ever want but without the knowledge and ingenuity of Lisa, Keith and Steve, its all just talk.

What could a low voltage, air-powered mixer do for you?